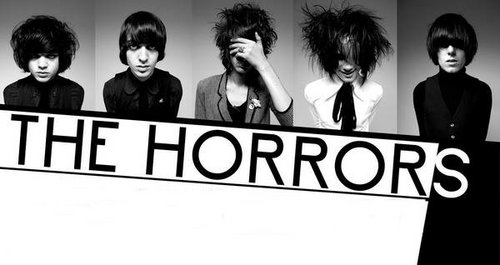 So The Horrors walk into FUV, and 5 hours later they leave me with some of the coolest tracks I’ve heard in a while. By radio standards, our session was a marathon – four hours spent getting sounds and an hour for the interview and performance. Definitely time well spent. Thankfully, they had a brilliant FOH engineer along to help expedite things.

If anything, this session proved to me that James Meeker’s ingredients for drums should not be taken lightly: player – kit – room – mics. The player was a pro. The kit was a fairly new Pearl Reference kit with fresh heads, rented from SIR. The room… well, I couldn’t do much more with the room than I already had. Here’s the audio from the live mix; the rest of this post is techno babble. 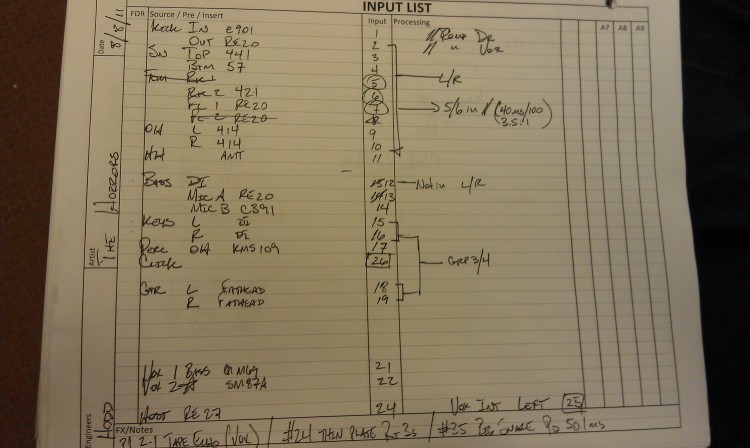 Drums
The overheads were 414’s in the usual symmetrical spaced pair approach.

Kick-in was a Sennheiser e901, balanced with an RE-20 inside the resonant head on kick-out. The long axis of the RE-20 was positioned parallel to the long axis of the kick drum, while the front was elevated vertically about 30 degrees.

I used a Sennheiser 441 on snare-top, positioned as such that the front of it was vertically aligned with the rim and 1.5 inches above, the capsule was pointing at a spot halfway between the center of the batter head and the rim, and the body of the mic created about a 30 degree angle relative to the top surface. On snare bottom I went with a Shure 57 positioned so the capsule of the mic was parallel with the resonant head and

AKG 535’s on toms and an AMT B811 on hi-hat.. nothing special there. Drum subgroup (less kick-in and hi-hat) was compressed at 3.5:1 in parallel through and ART Pro VLA II. Their FOH asked to change my attack setting from 20ms to about 35ms, to great effect.

Guitars/Keys
The electric guitar (which was played by an electrical engineering wizard) was recorded with two Fathead II’s. Both mics were positioned about two inches from the edge of the speaker cone. The electric and keyboards (which were DI’ed) were grouped and routed direct through another VLA II with 2 or 3dB of 2:1 compression at the loudest points.

The bass guitar was recorded with a phase aligned RE-20 and C391, both near the center of one of the cones in the 4×10 cabinet. We recorded a DI as well, but I left it out of the mix.

Vocals
The lead vocal was recorded through an SM 87A. Generous EQ cuts sub-250Hz, compressed through an 1176, with tape delay from a Lexicon PCM81 and plate reverb from a Yamaha SPX2000. Listening to the effects, you can probably hear the snare bleed in the vocal mic towards the beginning.

The master buss was routed through an SB4000 at 2:1, 30ms/100, at the T2 sidechain tilt setting. Brought up from mix level with Endorphin.