So, I’m still working on this reel-to-reel machine. Much of the operation has improved, but there’s one problem I can’t seem to track down. Time to ask for help! Here’s my recent post to Gearslutz. Or you can read the actual thread (where the quest continues).

Otari MX-5050 BII Problem – Not for the faint of heart!
Hey guys, apologies in advance for the wall of text, but this is a diagnostic problem and I felt I should include as much info as possible for those willing to help. You may want to zoom out on your browser by pressing CTRL-minus a couple times. The DUT is an Otari MX-5050 BII; I’m rescuing a couple of them from storage exile, and this one has me stumped. Schematics are attached (courtesy of analogrules.com).The device powers on, and transport controls are functional. All fuses intact. Capstan spins and transport function work when the tension arm is raised; everything brakes properly when it drops. After initial cleaning, I replaced the pinch roller and VU meter lights right off the bat. The device records and plays back, but I noticed the variable pitch control and the high speed/low speed switch have no effect on capstan speed. Other switches and pots demonstrated poor contact, so I ripped the unit apart, cleaned every accessible contact and switch with Deoxit (including the H/L switch on the main control board) and gave it another try. This seemed to restore operation of the pitch control switch (as indicated by the red LED lighting up reliably), so I degaussed the tape path and prepared for alignment. Picture Otari 1.jpg shows a look at the inside of the machine and Otari 2.jpg shows the front.

My cal tape was playing back noticeably fast. Measurement showed my 1kHz tone on the MRL tape was coming out at 1.41kHz. But just for an instant it dropped down to normal playback speed, and the speed switches & pitch control DID work. So the intermittent nature of the problem made me think “bad connections.” Before trying to diagnose anymore, I set about closely examining the components.

I reflowed all the relays and several other solder points, and found cap (C603) with a no-longer-existent solder joint. I tested the component out of circuit (test OK), and put it back in. Image below.

Further observation showed some resistor burn-in at the 3W R676 and R677 on the PCB, and referring to the wiring diagram they are connected in series to 38 and 59 AC volts respectively. The resistors are further connected to some plastic caps – could the caps have failed due to a short in on of the power board switches? To be safe, I swapped the resistors with equivalents, pulled all those plastic caps (test OK) and replaced them. Image “Otari 4 R676.jpg” below. 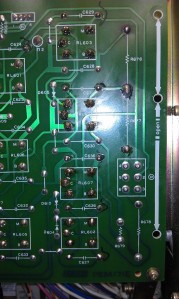 No change in operation – still no speed control. Wanting to eliminate some variables, I swapped the timer drive PCB (the one with all the ICs under the supply motor) and the capstan servo PCB (tucked underneath the take-up motor) with replacements. Still no change in operation.

I removed both the High Speed/Low Speed switches from the front, and the H/L master speed switch from the main control board. Checked for any shorts, and both tested fine. Replaced with no change in operation.

Having eliminated the some variables, it seemed there was no option but to try and trace voltages with a scope. This is an area I’m still trying to master. While I usually can tell what I’m looking at, I don’t ALWAYS know what I SHOULD be looking at. I started by looking at the AC voltages to the main control board at the fuses. The AC voltage at many of the fuses were off by several volts, and also showed some serious peak distortion – not the clean AC I had expected. I don’t know if this, in and of itself, presents a problem. Here are pics of the signals present at the fuses. 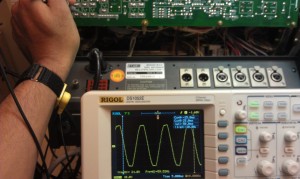 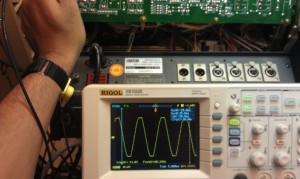 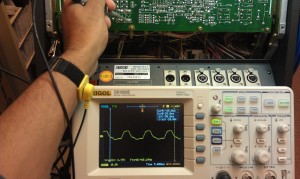 Starting with fuse F701 I followed the trace to its bridge rectifier D701, and observed clean DC on the output.

Followed that up to the electrolytic caps, and again found pure DC.

There was no AC component shows coming off of that cap, which is what I’d expect in an AC filtering stage.

Moving on to bridge rectifier D705, I noticed some noise present on its DC output. I thought it odd, because what little I know tells me that filtering at this stage should be pretty pure.

I coupled to AC to get rid of the DC component, zoomed in the vertical amps and saw this waveform riding the DC output of D705.

Is that bridge need to be replaced? Could these erratic voltages shown at the fuse indicate a faulty power transformer? If the circuit isn’t seeing the voltages it needs, or if noisy DC is interfering with proper operation, I guess I can’t expect anything to work as intended.

Any help or insight would be greatly appreciated! I’m determined to find the cause of this irritating problem.

Will keep you posted on how it goes.